The invitation to the Fur Gnome Wold

The evening sky turned reddish as the flapping of a bird’s wings could be heard in the distance, coming closer and closer. The first one to hear the bird was Jingle Jangle, the pony, whose ears were much larger than Tabitha’s or Blimpy’s and who was standing outside in the pasture. He called out, “Tabby, something’s coming. Sounds like a post owl. I wonder who’s writing to us?”
Tabitha, who was working on a potion in the witch’s kitchen wearing her blue apron and a bow in her green hair, turned and replied, “Jingle! I’ve told you a hundred times not to call me Tabby! But yes, I’m also curious about what that might mean. Let’s wait and see.” And with that, she stepped away from her cauldron and walked out onto the porch.
A little while later, an owl could actually be seen through the trees, making its way to Tabitha’s hut and getting closer and closer.
Skillfully – as only poste owls can do – it landed gracefully on the porch and held its leg with the scroll so Tabitha could remove it.

Tabitha held out a few worms to the great short-eared owl, which were immediately and greedily devoured. “Wait a minute in case I need to send a message back” she spoke, unrolling the scroll.
“Ah, it’s an invitation from our friends Quasim , Darick and George. They are organizing a small meeting over in Fur Gnome Wold to discuss further action regarding George’s lost magic hat. Still a mysterious matter…. Next week. Well, that’s when we’ll leave a few days early so we can do some more errands at the market there. Maybe a new dress or a new pair of shoes? Jingle, Blimpy: we’re leaving in the morning!” she said, scribbled her answer on the back of the scroll, tied it to the post owls leg and sent her off, back to Quasim to expect them in 7 days time.

And so it was done. Early the next morning, Tabitha packed her luggage and provisions for about a week and didn’t forget her potion kit, because you never know what might get in your way along the road. The panniers filled and strapped to Jingle’s back, the journey began.
Blimpy was also allowed to ride along. On Jingle’s buttocks.
Fortunately the weather played along, so they made good progress through the marsh. And not only our three companions were up early. They met minks, raccoons, beavers, turtles, but also alligators, poisonous spiders and a variety of snakes like vipers, mambas and cobras.
These normally dangerous creatures were Tabitha’s friends, as were all the animals and creatures in the swamp, and so they had free passage to the borders of the Frog Master Marsh and no other special incidents occured. Here and there they picked up a few herbs and even helped a fox out of the trap of some poacher – which made Tabitha angry. 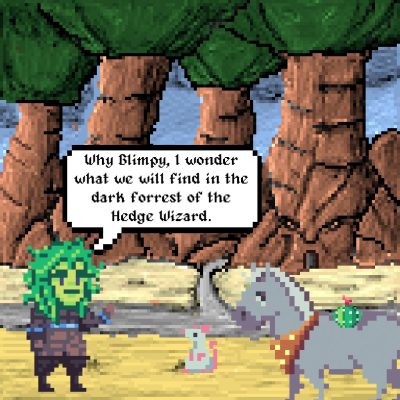 The shortest way to the Fur Gnome Wold leads over the Carnival Pass (one wonders at the name) between the Fey and the Hedge Wizard Wood. And that is where they arrived after a last night under the open air sky.