It happened in a small poor wooden hut near the shore of the mediterranen sea close to the  settlement of Joppa, a small port city where fishing boats where anchored and even a roman galley was to be seen there once in a while. Today Joppa is called Yaffa and is a part of Tel-Aviv. But then, in the time when Augustus was the emperor of Rome and the lands around the eastern mediterranean were host to many cultures there was no Tel-Aviv. Joppa was an important city, as it was a hub for cultural exchange and merchants from all over the known world, coming by sea or land, would hackle over goods here.

It was the year 10 and the man that was to become very important in this region and then the world and for thousands of years to come was, well,… he was 10 years too.
But this is not his story. His story has been talked about in so many thousands of books and it is in the mouth ob millions of followers daily until this very day. Either in a praying way, but sometimes also in swearing.

No, this is the story of a young girl that was born on 20th of the 6th month of the year 10 in this very hut. Her father a hard-working fisherman that did everything for his family and her mother a seamstress that would mend clothes for the women in the village. Tabitha was born as a sister to 4 brothers and 3 other sisters. Growing up, Tabitha always had the sense of helping people in need. Running errands for elder women, helping her mother whose eyes were getting weaker, fixing and mending cloths of neighbours, but also playing around with designs of her own, creating new types of clothes. Her mother found this to be silly, but she liked it.

She was a popular and happy child as she helped everyone when she grew older. As many around her she was of jewish belief. She often played with her friends Joab, Sarah and Peter when she was younger. She revered Peter specifically. He was a few years older than her and also a good willed boy. They had a lot in common.

It therefore must come as no surprise that years later they were to be followers – or as they called themselfves diciples – of the boy born in the year 0.

But first things first… Growing up into teenage Peter got married to Sarah as their parents had decided at their birth and Tabitha followed in her mothers footsteps to become a seamstress. Though she went a step further and also created new clothes and she was so good at it that, even some of the rich bought her wonderful fashion.

Yet she never stoped caring for others and learned much about herbs and healing and was – despite of her young age of under 20 – soon well known in the surrounding area as the go to woman for clothes and medicines.

Peter and his wive had moved closer to the port as Peter – who would later become the patron of all fisherman – was of course a fisherman himself.

Joining a cult of believers

But life was not all easy and great. The occupation by the roman invaders often lead to struggles and conflict. The ordered and structured way of the romans just did not sit well with the local population and aside from cultural differences there were also the tributes to be paid and then these strange gods they all believed in – when everyone know that there was only one god and his name must not be spoken in vain.

The occupation was hard on every of the tribes living in the multi-cultural pond that had done well for so long before they came.

Now, nearing her twenties, Tabitha had met Peter on occasion and he had told her of the wonderful man that toured the land and taught a new truth of the one god. His name Yeshua and he would speak and heal and perform miracles and even said to be the son of god himself. This brought him into much trouble with the local jewish high priests more than once.

One day, now 20 years of age – and still nor married – Tabitha went to one gathering of Yeshuas fans and heard him speak. She was immediately enthralled by his words and loved everything she heard. Just like her childhood friend Peter she would become Yeshuas disciple and study and spread his teachings among her piers and friends.

Yoshua – these days known as Jesus – was nailed to a cross by the roman occupants 4 years later and died there. One too many times had he stepped on the toes of the mighty clergy.

All were sad and scared of what would come, but some had the courage to continue his work. Among them was Tabitha and Peter and many others. Among this work was the healing of sick and the caring for the poor and as Tabitha always was this person anyways it was not difficult for her.

She carried on with this mission for some years getting more and more experienced in the art of herbal drinks, potions and healing in general, until, one morning in her late 20ies, she just did not wake up anymore. She had died.

This was a great shock to anyone who knew her of course. Many of her friends, some of them widows from the wars and some widowed by the tough and brutal persecution of the christian cult, were there at her deathbed crying and crying. Peter who had heard of this could not believe it. To him too it came as a great shock and he went to Tabithas house and there she was. Lying on her bed, surrounded by the many weeping.

The awakening of Tabitha by the Bell

And Peter kneeled and started to pray and told everyone to kneel and pray with him. He spoke, directed to the heavenly father and his son and the holy ghost that this life was taken unjust. Together they chanted and sang the mystic songs of old that their fathers and forefathers had told them. They sang for long hours until the sun was at its highest peak. And of a sudden, when the day was brightest, the room became mysteriously dark, the candles on the table were blown out by a strong wind that swirled through the room. Everyone was calm but would not stop their chant. And when glancing up onto Tabitha’s body a strange light started to emanate from inside her chest. A warm and powerful, yet soothing glow that brought warmth to the hearts of everyone on the room.

The door blasted open and filling the enclosure was a sudden ringing of a bell. The sound was from the voices of angels, and it rang from the handbell of an unbeknownst stranger that stood in the doorway against the bright light of the sunny day. The figure was silhouetted in a warm glow and was clothed in a green cape with a red hood. From within the hood only a pair of bright blue eyes could be seen. Piercing blue eyes. Such eyes few had seen in this region. Only the people of the north had such unnatural eyes. A murmur went through the crowd. „Look it is the Wazir of the east that came from the north! The one who rings the bell. The minister of the great one. “ 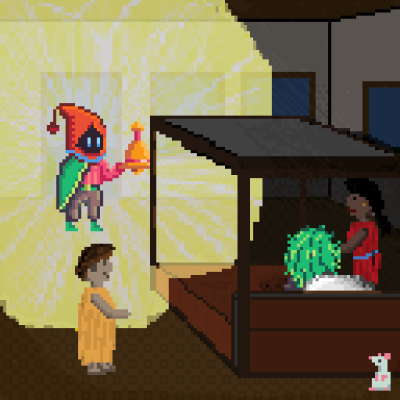 And the Wazir spoke: „Hear me, believers, and friends of Tabitha. Your prayers have been heard and life will be given again to the one who lies here before us. For her deeds in life were good and just and great and must not be forgotten. We will give her again breath and soul and heart. But as it is, one cannot return to the living without carrying a burden.
Hear this: Tabitha will rise again and breathe and do the good deeds. But she will not come to rest again. When her time is come on earth in this age, she will be reborn as a healer, wise woman, and sorceress. And when her time has come in that age it will be so again and then again and over. She will be reborn. She will know something, and she will know nothing. She will be here and there. Even in the phantasy world of the worthy will she exist to do her good work long after the runes of the north with have been forgotten. Until which time the great one decides her work is done. This is what I say, and this is what is done.”

There was a last ringing of the bell, a thunder, and a flash of light – and the figure was gone.

Everyone gasped with their mouths open when a soft, sleepy voice spoke from the center of the room: „What happened? Why is everyone here? Did someone die? Oh… Peter, my dear friend! It is wonderful to see you, but why do you all look so frightened and scared? “

The light slowly returned back to the room and shone through Tabitha‘s hair that had a very light green shade to it, as did her skin. Barely noticeable. There was a rune on the door, the rune of steel and in the corner under the window, an albino rat peeked around a chest, blinking.

A little boy came in and said: „Hello, someone home? I have a delivery for Tabitha. It‘s a peyote!“